This is it.  The countdown.  My last Sunday night here in Dunedin (for now…..).

I didn’t really know what to expect when I moved here a year ago.  I don’t think I tried very hard to imagine what it would be like….I have moved enough in my life (this is the 7th country I’ve lived in) I just assumed I’d figure it out (I did).  But, moving here was on my bucket list (one of two things, if you remember; the other was becoming a doctor).  And it was everything I had hoped it would be for me, but even more importantly for my family (this the first extended stay out of the US for all of them.  So, what was so special about being here? 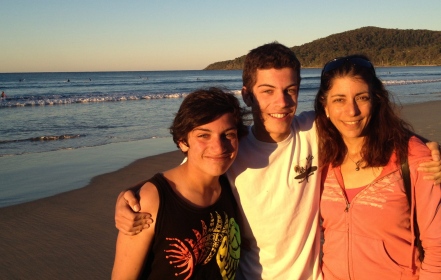 See the smiles?  We had so much family time (OK, maybe the boys might have said TOO much family time)..but nevertheless, as a parent, I know the boys will be under my wings for such a short time and it was just heartwarming to see them having so much fun (and to have a job here which allowed me the time to be with them as much as I was).  Life…work…in the US seems so, what’s the word?…consuming.  Here, Deb and I really got to be with the boys. We made it almost every single one of their sporting events, which would be a Herculean feat to attempt back in the US.

Another thing I hope I never forget is the drive into work each day.  We live out on the Otago Peninsula, on a meandering road which follows the Otago Harbor for about 10 km.  It’s just serene to drive along the water each morning, and just last week we were greeted by this sunrise. 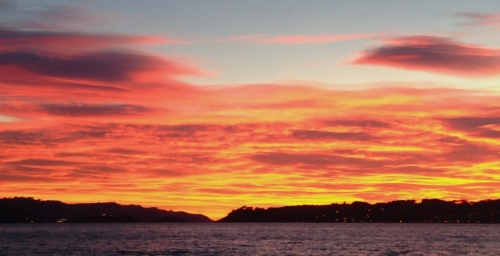 Probably the most spectacular sunrise I’ve ever seen….and I’ve seen many a sunrise.  And I’ll miss listening to Nz radio on the drive into work and home again in evening.  My favorite station is 91.8FM- the Edge Radio.  The disc jockeys are hilarious!  They say things and do things you could never say or do in the US (lots of four letter words).  They have this one segment called, “What it feels like.”  Here, the three disc jockeys spin a wheel, and the winner (loser) of the spin has to play the game, “What does it feel like?”

Because of this segment, here are some of the things I now know:

2. I don’t want to shoot my bare foot at point black range with a paintball gun.

See what you learn by traveling abroad?

I’ll miss the weather reports.  Which tell you what the weather was like today.  So funny.  And, strangely enough, I’ll miss the weather.  Northern California, especially in the summer, is just one blue sky after another.  Nice, to be sure…but where is the drama?  Last Thursday my buddy Eion (pronounced Owen; he’s from Ireland) and I had a coffee outside in the after because the weather was SO nice.  Then, on Friday we were greeted with this: 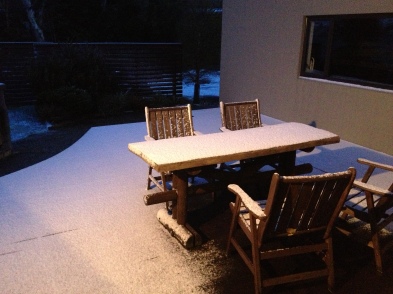 The coldest day of the year, and lots of snow (even at sea level).  Then, on Saturday it was back to sun (and about 50 F).

There is lots more coming, but I wanted to talk a bit more about the bucket list. 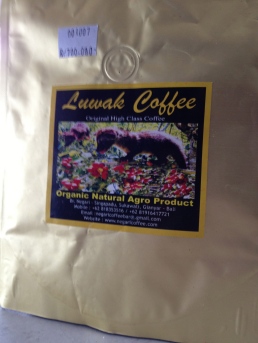 This is Luwak Coffee, which my sister brought me from Borneo.  That’s a picture of a civet on the front.  I am, truly, a coffee hound and Nz has been good to me since they take their coffee seriously here.  Why, I’m considering investing in my own espresso machine when I get back to the US (that sound you just heard is Deb saying NO).  Anyway, the civets eat the coffee beans and then, how to say this delicately….they eliminate them.  The droppings are collected (now, THERE is a job!) and roasted and that is Luwak coffee.  For a coffee hound like me, it was a treat to taste this very rare (and delicious) coffee. 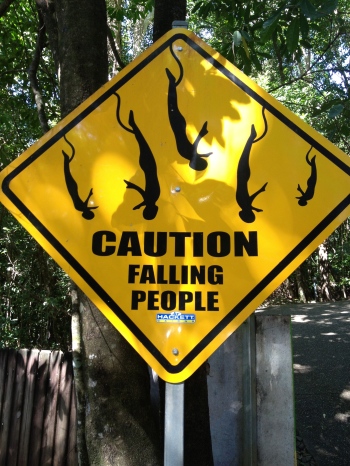 And it would be impossible to talk about Nz and a bucket list with talking about jumping off a bridge.  Quite honestly, it was never on my bucket list.  But of all the things I’ve done here, it has been one of my favorites.  No just for the thrill of it…and it was stunningly thrilling…but because it really was metaphor for our decision to move here.  We didn’t know what it would be like, and no matter how long you stand there and look over the edge, you will never really know what it’s like until you jump.  So, just jump.

More posts this week (I