When my two youngest boys, Ryan and Matt, signed up for ‘summer sports’ teams at Bayfield High School at the beginning of the academic year in January, I was proud of their choices.  Matt, who is a year nine (or freshman) in the high school signed up for softball (they don’t have hardball baseball here) and volleyball.  He’d never played volleyball, ever.  Ryan signed up for water polo, futsol (indoor soccer on a basketball sized court) and track.  Ryan never liked soccer back in the US, and after one or two seasons at the tender age of 6 or 7, he knew he’d had enough.  And yet, here he was,  giving it another go.  Must be something in the water here.   Back in the US I work at the hospital every other weekend, which makes attending sports games challenging.  My job here, on the other hand,  is much more flexible, and I can attend the overwhelming majority of the boys’ games.

I went to Ryan’s first water polo game about six weeks ago and watched the kids struggle.  Most had never played water polo before.  At one point, I thought I was going to have to revive my life saving skills and jump in to help one of our players who was having trouble just swimming to the other side of the pool.  I looked around for the coach, and saw the team had a manager, but no coach.  Gulp.  What else could I do?  At the end of the game (we lost by many goals) I took a deep breath and introduced myself and asked the manager if she thought the team might like a little help.  You’re hired, she said.  Now, I was all in.  I also asked Matt if he would consider trying out some water polo to help the team; he’d never played before, but said, “Sure, why not?”

Water polo season ended with last night’s game, and this post, whilst (how about that for a Kiwi word?) seemingly about sports, is as much about what life  is like for an American family living in Dunedin.

Bayfield High School is one of the few co-ed school in Dunedin.  The more prominent high schools, such Otago Boys, Otago Girls and John McGlashan are single sex schools.  There is about an equal mix of boys and girls on our water polo team, and most of them had little prior experience with water polo.  Our smaller players don’t even stretch to 5 feet tall.  I’m not sure if even our strongest swimmer could swim 50 yards of freestyle in under 30 seconds.  I was the ‘coach’ at the next week’s game, and tried to help as best I could, and even though there was some improvement from the prior week, I turned to the manager and commented, “I think we are going to need some practices….”  Most of the sports teams for the high school don’t practice much, and some not at all.  Our manager, Mrs. Alibone (who is also the boys’ science teacher)  arranged some pool time at Otago Boys (Bayfield doesn’t have a pool, Otago Boys High School has it’s own indoor pool).  After the first practice, I overheard one of the kids say, “I can’t believe it!  We practice for a whole hour!”  Yes, many of the sports teams, when they do practice only do so for 20 to 30 minutes.  I saw, in our first practice, we were going to need a little more swimming strength, so I offered optional swim workouts one or two evenings a week at the local community pool.

What was really interesting was with each practice, someone new would show up.  “Hey.”  They would say.  “I heard this is fun, thought I’d give it a try.”  Sure, have a go….everyone is welcome.  Day by day we got a little better.  Yet,  even at the end of the season there are a few players who still couldn’t quite master an egg beater kick, but it didn’t stop them…

Last week the championship games began.  I told the team if we won our first round, I’d get in the water with them for the next practice.  We won, and yes, thirty-five years after my last water polo practice in college, I got in the water and practiced with the kids this week.  I didn’t drown, which was good since I was the only doctor there.

Yesterday was the championship game, against Logan Park High School. We have never beaten them, and we lost to them 6-0 in the beginning of the season.  We had our work cut out for us.  We were tense.  Ryan told me he couldn’t even eat his lunch at school, he was so nervous.   It was a very hard fought game, and it was 1-1 at half-time.  Our players sensed we had a chance to win, and really stepped it up in the second half.  The other team had one really superb player on their team, but each time he would break away and get the ball, two of our players would be all over him.  He was near the goal several times with the ball, and our goalie rushed out and stole the ball from him.  We shut them out in the second half, and won the game 3-1.

We then rushed down to the Edgar Center (the large indoor sports area in Dunedin) for Matt’s volleyball game.  They also won, beating Otago Boys in the third (and deciding) game.

I still had some work to do at the hospital, so after Matt’s volleyball game we drove the boys back home and got them dinner, and then Deb and I headed back to the hospital.  After we finished the work we had a nice relaxing ‘date night’ dinner at a restaurant called Table Seven just a block from the hospital.  It’s a great little place, on the first floor (for the US, second floor) overlooking George Street (which is fun to do, on a Friday night).  It was a great time for Deb and I to talk about the day, the week, and indeed our whole time here so far.

We sat there at the big picture window sipping Central Otago Pinot while awaiting our first course of beetroot and feta salad.  I talked about how much fun it was to go to the very small Balclutha hospital each week.  It’s about sixty miles Southwest of Dunedin, but the scenery makes the drive pass by quickly. 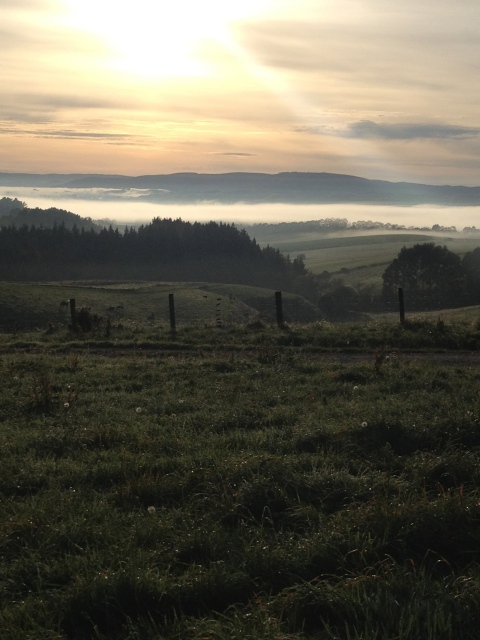 We continue to marvel at the scenery here in Nz.  A couple of weeks ago we headed into Central Otago.  Matt and I had plans to drift fish the Clutha River while Ryan and Deb cycled the Central Rail Trail (a 65km leg, this time).  We awoke in Cromwell, where we had spent the night in this great little Motel, to a sunrise rainbow.

And then later that day Matt and I hooked into a few fish….

The fall colours were beginning to show, and the clear water of the Clutha provided a great contrast to the greens, yellows and browns.

Even the drive to work in the morning is often spectacular, like this sunrise we captured last week. 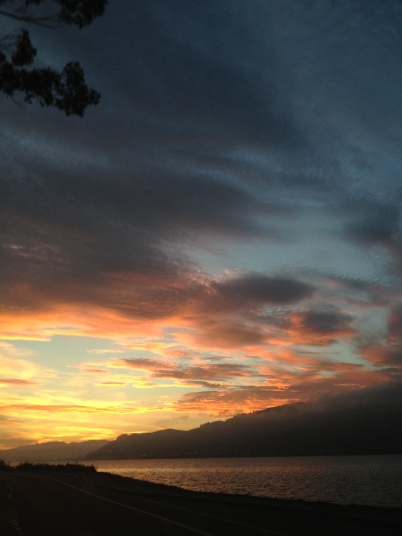 Deb and I  both remarked how the people here seem to reflect the beauty of the surrounding nature.  Everyone is so genuine, so nice, so helpful.  They are proud, and rightly so, of their country.

But like most parents, a good part of the conversation was dominated by talking about our children.  Ryan wants to stay here, period.  Even Matt is warming to life here, no small feat for a 13 year old.  We love how the boys are trying new sports, new languages (Matt is learning some German), and making new friends.  It wasn’t long before our conversation turned back to that day’s water polo game.  The boys played their hearts out, and saw some real success.  They saw, too, that a little extra effort goes a long way (that’s always a good one, if you’re a parent).  It was a proud moment to have all the kids gathered up by sports photographer for the championship photo.  Here it is, the Bayfield High School Water Polo Team.

It’s almost impossible to capture the essence of life in Dunedin without being here.  I could not have envisioned working as a doctor AND going to my sons’ water polo games…..let alone coaching the team.  Yet, here I am, doing all that.  Deb and I are old enough to understand how fortunate we are to live this dream.  It’s  a priceless experience.