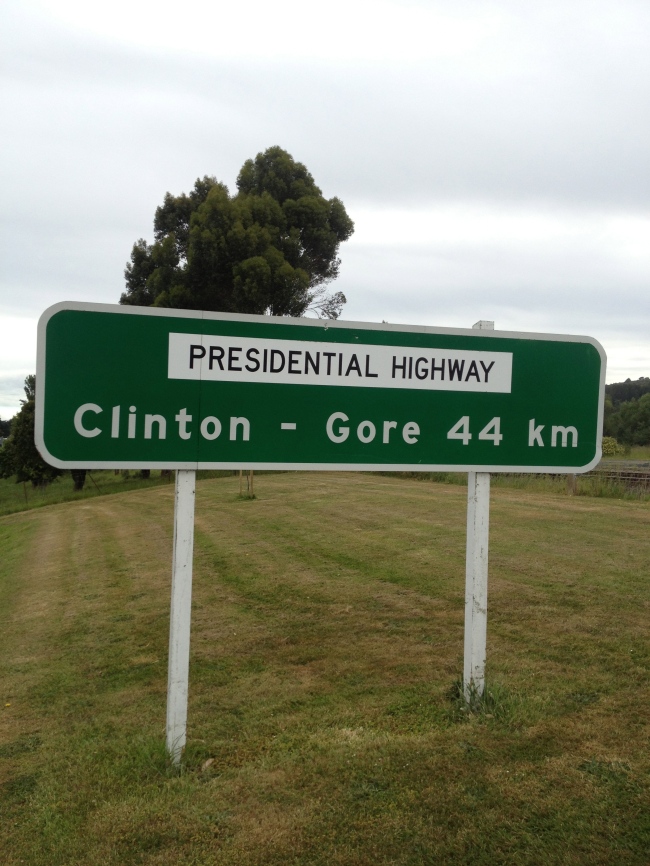 About 120 km southwest of Dunedin is the town of Clinton, Nz.  If you continue on Highway 1, as I did, 44 km later you enter the town of Gore.  That 44km stretch of Highway is named…..wait for it….the Presidential Highway.  Who said they don’t like Americans here?

What was I doing in Gore, you ask?

Yep, that’s a model of a brown trout, in the middle of town, and I promise I’m not exaggerating when I tell you it is 20 feet tall (look at the car in the background).  And, though you might be able to read the small print on the ‘Gore’ sign it says ‘Capital of Brown Trout Fishing’.  Now you know what I was doing in Gore.

Actually, I was in Gore to visit a friend I had met in Wellington in November.  She’s a physician assistant at the hospital in Gore, and during the lunch break of our conference in Wellington I came to learn she and her husband have two boys, ages 14 and 16 years, and they like to fish.  Oh, did someone say fishing partner?  So last weekend they invited me down for some trout fishing, and it took about a nanosecond for me to say yes (the truth is, I kind of invited myself, but details, details).   As we talked Friday night she said, “Bring rain gear.”  Weird, I thought, the forecast was sun all weekend.  But, I did listen.  (If my wife reads this, I’m dead.  She’ll be thinking, ‘He never listens to me.’)

I arrived safely in Gore (“turn right at the trout”) and we made introductions all around and then headed out for some fishing.  We first fished a little stream which runs through a number of cow pastures.  We’d been on the stream for about thirty minutes when I looked up at the sky, which appeared somewhat ominous.  It was sunny where we were, but thunder could be heard moving closer and huge dark clouds loomed just over the mountains.  Yikes! 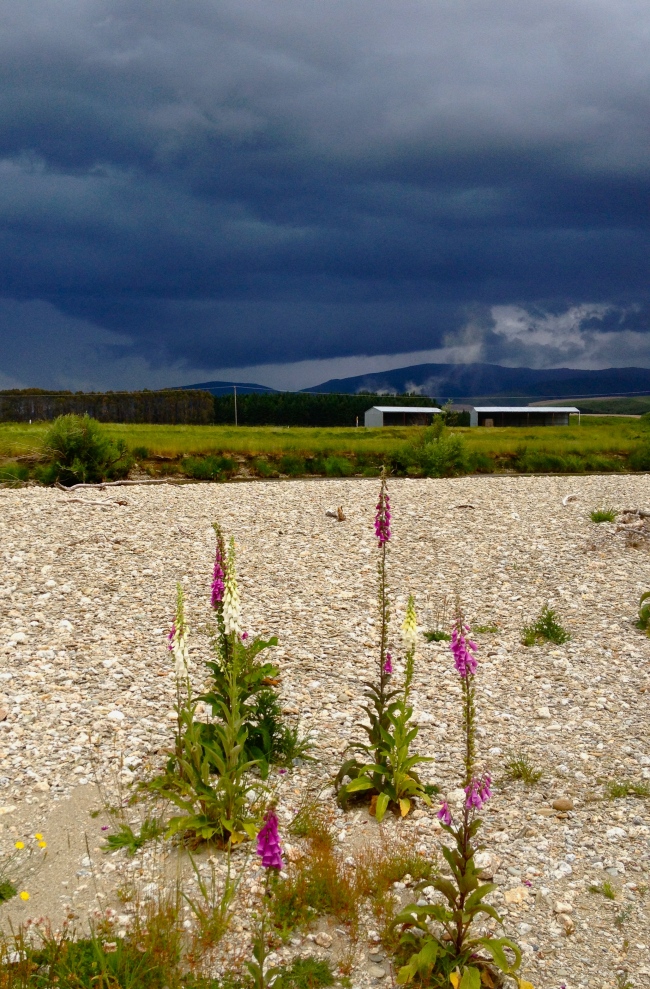 We headed back to the car, just in case the storm came our way (graphite fly rods are kind of like a sign to lightning which reads, “Strike here”).  The winds shifted, and the storm moved across the valley several miles from us, so we headed back out to the stream.  We had been fishing for about twenty minutes when we spied a huge trout.  Easily 5 pounds.  Just as we were about to cast a fly to it, and the skies opened and it started to rain.  Not just any rain, but buckets of water with more lightning and thunder.  We quickly ran back to the car and decided to head further up the valley and try another river.  Here’s the weird thing, just twenty minutes up the road, it was completely dry.  It hadn’t rained there at all.  We were now in a scenic area called Piano Flats in the Waikiaia Forest.  The river which runs through the forest, the Waikiaia is a beautiful gin clear river where trout that are legendary (10 pounds).  We hiked along the river and found a suspension bridge which crossed the river with this sign posted, clearly, as you ascended the very wobbly ramp to the chain link bridge. 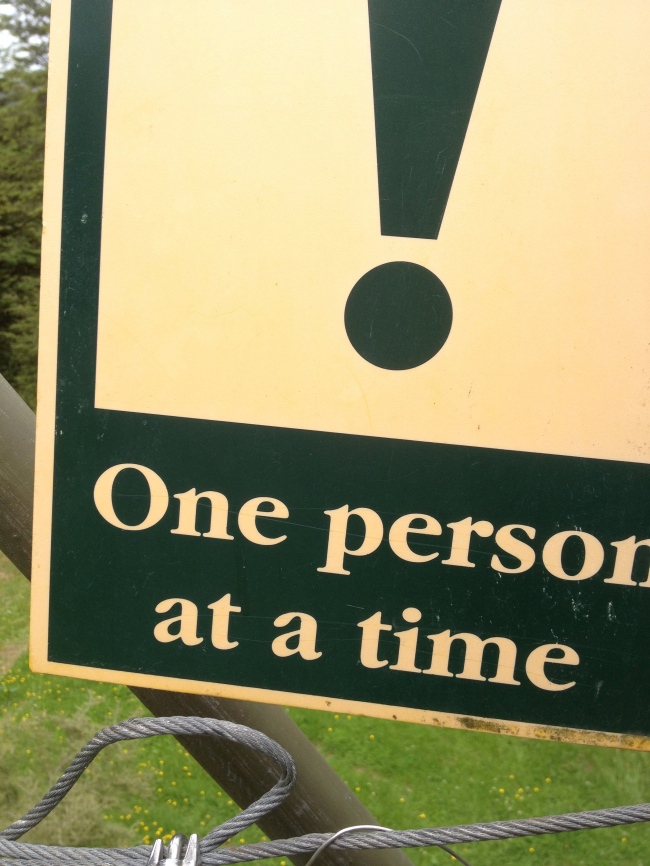 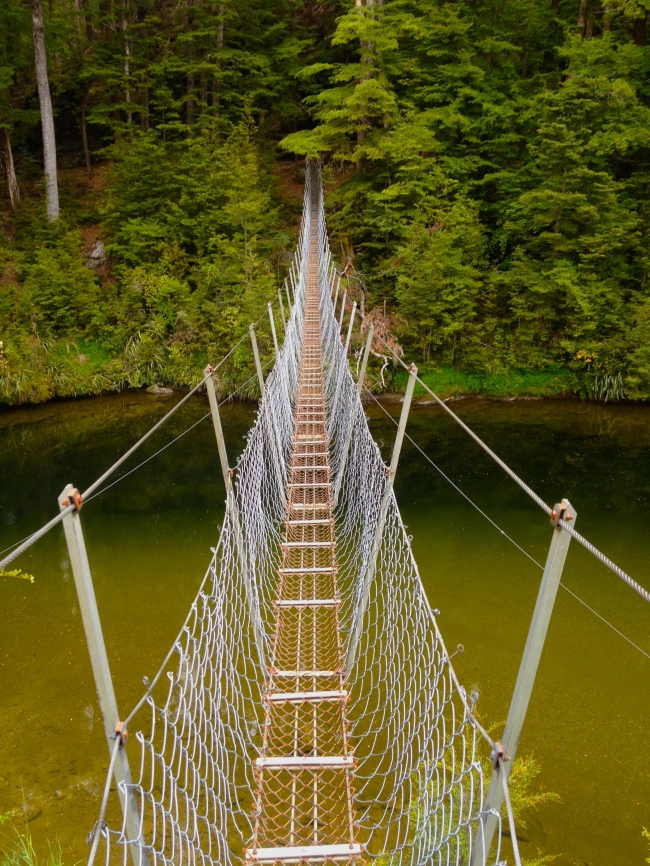 It was a great experience to walk over the river, bouncing along on this chain link bridge, looking for trout below.  What an adventure!

We walked a little further up the road, and came to this interesting sight.

I have no idea what this was all about.

This was a weekend of fish stories, about the one that got away.  We hooked into two massive trout, but each one broke the line.  No pictures to show, which was sad.  But the beauty of the rivers and forest are haunting (and the trout are haunting).  On Monday, I found myself trying to concentrate at work, but instead thinking of a big brown trout, his dark silhouette outlined by the limestone bottom of the river, lazily swimming upstream, gently moving left or right to take some small insect which happened to have the misfortune to be near him.  It’s enough to drive you mad.

Have a great day, and tight lines.

I promise no fishing stories in the next post (because I’m on call this weekend, and can’t go away to fish, not because I don’t want to write about fishing).

3 thoughts on “A Presidential Weekend”