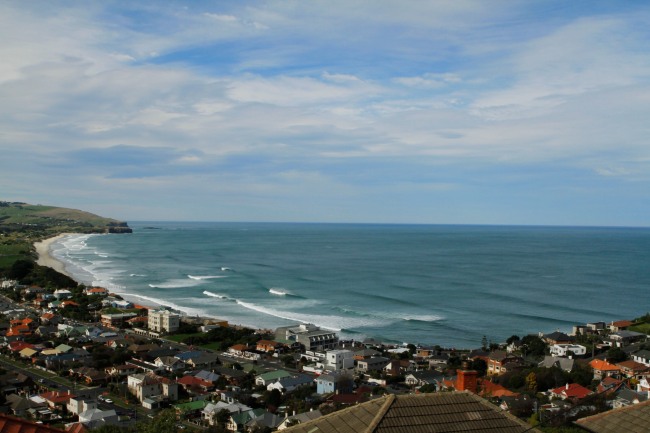 Beginning last night, and lasting throughout most of the day today, the internet was out at my apartment.   That meant no Skype, and therefore no talking with my family.   It’s Saturday, and I’m not on call at the hospital this weekend, so the opportunity for personal contact was scarce.  I don’t yet have a big social network, you could say.  Take away the computer, take away the hospital, and all that is left is….New Zealand.  So, off I went to explore.  But first, since it was Saturday morning, I headed to the Farmer’s market (remember last week; the market hasn’t changed much since then).  Love their bread and fruits.

I ventured out in my spiffy decade old Subaru (she’ll get a starring role in a picture, later on).  My first stop was St. Clair and the beach.  Dunedin is, geographically, a very large city (it is the fifth largest city in the world).  Much of Dunedin surrounds the harbor, but of the other side of the Otago Peninsula is the Pacific Ocean, and St. Clair sits on the Pacific Ocean.  The photo above was taken on a hill above St. Clair, looking down at St. Clair beach.  There is lovely salt water pool (kept heated, unlike the ocean) sitting right on the shore at St. Clair beach. 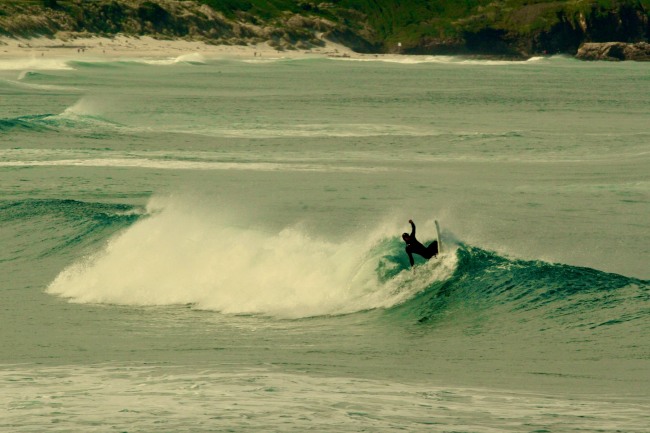 There is considerable surfing action at St. Clair beach, as you can see.  For about thirty years, the beach at St. Clair was one of the few remaining beaches surrounded by a shark net.   In the 1960s, several people were killed by sharks in a short period of time on this beach, and after that a net was put up.  It was taken down just about two years ago (there have not been any attacks here since the net was taken down), and the widely publicized New Zealand shark attack recently was in the seas on the West coast of the North Island.  Interestingly, more swimmers than surfers are attacked by sharks here (the opposite is true in California).  So, surf away!

From St. Clair, I meandered along the ocean road South heading toward the mouth of the Taieri River.  The small town there has the imaginative name, Taieri Mouth.  It’s about a 20km drive along the coast, with spectacular scenery along the way.  It was Saturday, so I expected crowds.

In the 20kms to the Taieri Mouth, there were no less than twenty turns off to the beach.  I didn’t stop at all of them, but I came close to half that amount.  At one beach, which was particularly long (about a five mile stretch of beach) there were people, several of them, but at all of the other stops I was the lone person on the beach.  I reached Taieri Mouth and stopped to get out and watch a few fisherman.  I hadn’t brought my fishing gear, since I didn’t think I’d have time to fish.  I did see one guy catch a sea run brown trout (a three pounder), which of course just got under my skin a bit that I hadn’t brought my gear.  Of course, guess where I’m going tomorrow.

The Taieri is a big river, and as it empties into the Pacific it is majestic. 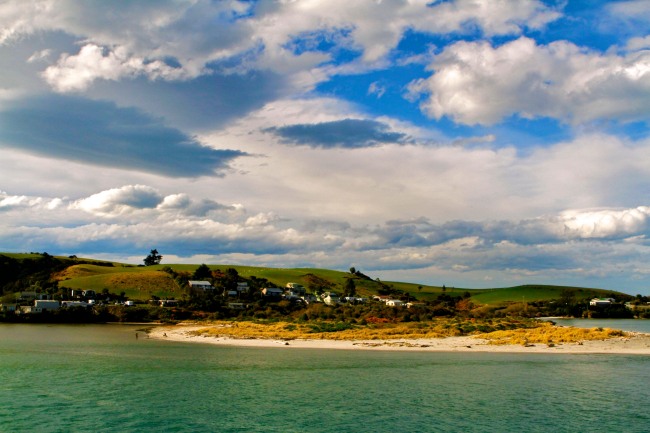 I headed back to Dunedin in a more straight forward fashion.  Without all the stops, I was back home in about 25 minutes….amazing, I had felt worlds away.

The internet was back up, so I got to talk (Skype)  with my son Ryan and wish him luck in is upcoming cross country meet tomorrow, and with my youngest son Matt whom I promised some surfing pictures.  I think Matt already has his bags packed to come here.  Or at least his surfboard….and wetsuit.

There was still daylight left, so I drove out the to harbor, parked my car, and went for a four mile run along the trail which outlines the harbor.  The sun had already dropped below the mountains which surround Dunedin, but its rose colored reflection illuminated the clouds and the glassy surface of the harbor waters.  It was an invigorating run, and when finished I sat down on the bench at the small park where the car was parked.  It was twilight.  The lights of the city were just beginning to shine and the air was still.  Birds were chirping (there are a lot of birds here) and I watched the last bits of sunlight fade over the hills.  It’s true I was more alone today, and no words can describe just how much I miss my family and friends.  But is there a better place in the world to be?