In my job contract there is mention of my duties at the Balclutha Hospital….yada, yada, yada….who reads that stuff?  Today, I got the Balclutha experience.  As it turns out, if you read the fine print (which was oddly the same font size as the rest of the contract) about every other week, I am to spend the day at the Balclutha Hospital, which is in the town of….wait for it….Balclutha.  Balclutha, or as the locals refer to it, Clutha, is a town of about 4-5000 persons about 75 kilometers South of Dunedin, about half way to Invercargill (which is basically the Southernmost town on the South Island of New Zealand).  It has a small hospital which is not staffed with a full time consultant in medicine, and the DHB (District Health Board) has arranged for one of the internal medicine consultants to visit the hospital once a week to help out with some of the more difficult patients (patients for whom the GP, or General Practioners, would like some assistance).  Today one of doctors and I went there (my first trip, so I was chaperoned).  The usual procedure is for the doctor who is heading down there the next day (we leave early in the morning, like at 8am) to check out a car from the motor pool the day before (they don’t expect you to use your own car, or, for instance to walk there).  So, this morning I was picked up at about 8am in the motor pool car.  Last night there was a big storm throughout most of Nz, with much snow falling on most of the country.  There was a only a little bit of snow on the hills above Dunedin (maybe 1000 feet above sea level). 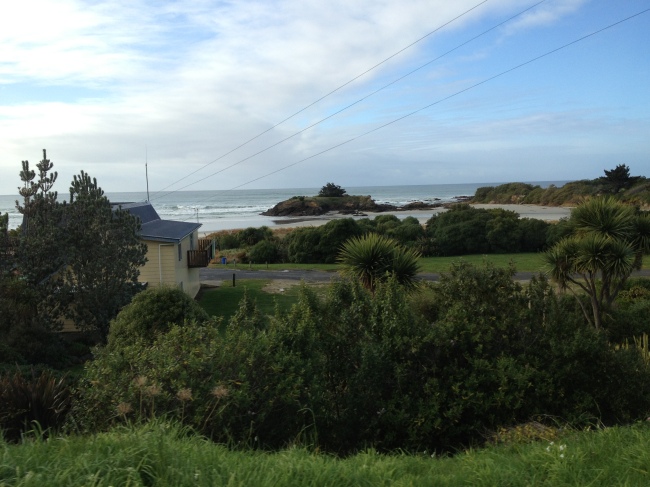 I snapped these pictures as we sped along the road to Clutha.  As you can see, it was a beautiful, clear, sunny day today.  We drove along the ocean for about 1/3 of the drive.  It’s not uncommon to drive for ten or fifteen miles along the ocean and see absolutely no one on the beach.  I’m not used to that yet (will I ever be?).  There are just not that many people here.  Anyway, we stopped just before Clutha to get gas (on the hospital, of course), and I noticed the gas station (a BP station) was remarkably similar to ones back home.  Refrigerators full of Gatorade, Red Bull, snacks….and a magazine rack.  While my colleague was signing for the gas, I took the opportunity to thumb through some the latest journals displayed.

For those of you who have let your subscriptions lapse, this is THE September issue of New Zealand Logger…and let me tell you, it was a page turner.

We arrived safely in Clutha a few minutes later (me still breathless from reading the latest Logger articles).  Parked in front of the hospital was this…. 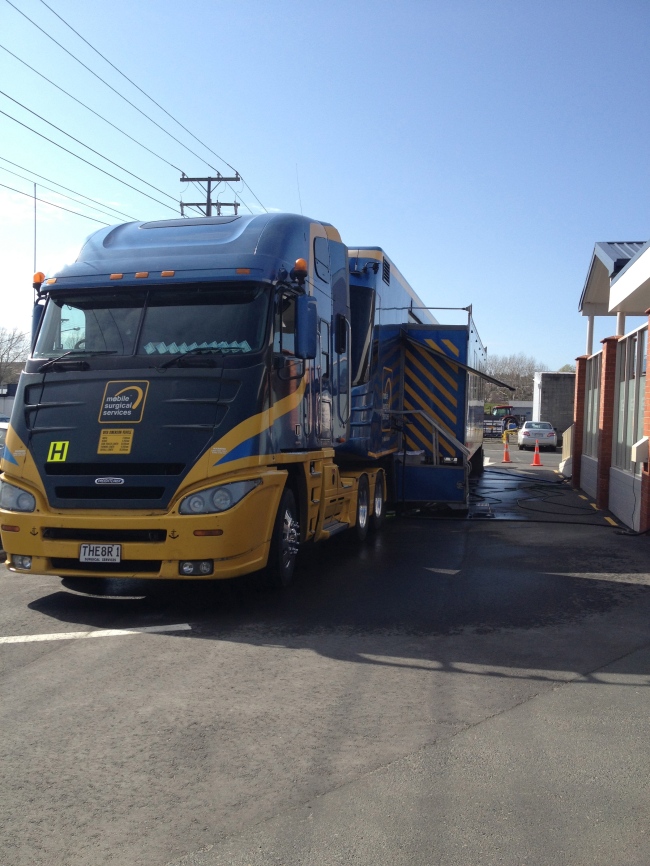 It’s the coolest thing.  It’s a HUGE trailer in which they perform outpatient surgeries, and it’s hauled around the country to places that typically don’t have the facilities for such things (things like laproscopic cholecystectomies, tonsillectomies, etc).  It comes to Clutha about six times a year.  Very cool.

The Balclutha hospital is small, about 10-15 beds.  There is no Emergency Department, per se (no ED doctors, either), and I didn’t see any telemetry.  Any who is unstable is transferred by ambulance (helicopter or truck, depending on the need) to Dunedin.  Today we saw four or five patients in the hospital in the morning, and then saw several patients in the clinic in the afternoon.  Everyone there was SOOO nice.  They had made us little sandwiches and a muffin, and put them on our desk for lunch.  So sweet.   Again, I was struck by the multicultural (well, multi-Anglo-cultural) nature of the area.  One of the doctors and one of nurses was from Scotland, another doctor was from Ireland, one doctor had studied at Cal (Berkeley).

As we drove back to Dunedin, I was inspired by the lush green rolling hills, spotted with white sheep.  It’s lambing season (see how easy that rolls from my keyboard now?) and many of the ewes had one or two wee little lambs following them closely.  It was very serene.  I don’t think it will every get old.  And I thought, too, about how the people here reflect the landscape so well.  The landscapes are so solid, and the people just the same.  So matter-of-fact, so grounded, so humble.  Being a doctor, I’m used to the fact I often bring people bad news…you have this, or your tests show that….(just once I’d like to say something happy, like, “It’s a new baby boy!”, but then that would presume I’d delivered the baby, a practice for which I’m not very prepared).  The diseases here are no different than the ones back home (strokes, cancers, heart disease), but I see I can learn a lot about life from the people here, who seem to have a broad(er) perspective on life, and take things in stride.

It is late Thursday night; this weekend I’m going to travel outside my bubble.  Stay tuned (I may even pick up the October issue of New Zealand Logger!).